A McKenna Returns to His Ancestral Home – It’s Not what You Think! 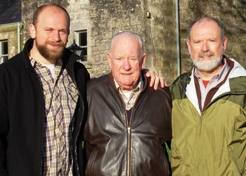 When most Irish-Americans make the trek to their ancestral homes, they are anticipating hearty fare, like the rightly famous Irish stew. But for me, it’s different. I think of pappardelle with a wild mushroom ragout, along with a glass of Chianti. When I visit my ancestral home, I stop at Venda Ravioli and Tony’s Colonial. That is because this ancestral home is one of the most famous “Little Italy’s” in America. But before it was Italian, Federal Hill in Providence, Rhode Island, was an Irish neighborhood. Four generations of my family called the Hill home. It was my grandfather’s generation that moved on to neighboring Mount Pleasant.

When the famine ravaged Ireland in the 1840’s, thousands escaped to Providence, a city that they already knew from relatives who had preceded them there as early as the 1820’s. As with many immigrants, these natives, mostly from Counties Tyrone and Monaghan (my family), came to live near friends and family.

These companies, and dozens of others, many located on the edge of Federal Hill, supplied jobs to newcomers.

With its teaming streets, the sounds Nineteenth Century Federal Hill were those of English spoken with an Irish lilt, the mellifluous song of the Gaelic language, and the jig of the fiddle and the pipes.

As new construction filled the neighborhood, with it came dangerous conditions, such as shoddy construction, insufficient sewerage, and overcrowded quarters.

In such circumstances, disease was rampant. Like many of their neighbors, Peter and his wife, Catherine Duggan McKenna, lost several children to consumption. In fact it brought down Peter at the age of forty-two, forcing his children to leave school to seek work.

Difficulties within the Irish community were compounded from without. Nativist groups despised the Irish, who were the backbone of the factories, and who filled the ranks of the military during the Civil War.  And so, while minority groups, like African-Americans, had the right to vote, Rhode Island laws effectively forced the Irish off the voting rolls.

Like all immigrants to our country, these people wanted what was best for their children. And since most of the Irish immigrants on the Hill could neither read nor write, they wanted their children to go to school. However, there were many, like my great grandfather, Patrick McKenna, born in 1854, who went to work at age nine. Others were expected to work in the textile factories by age twelve. Incidentally, in the early 1870’s, Pat, like many young men, sought adventure as a horse soldier in the West. He returned to marry an Irish-American girl, Sarah McLaughlin, raise a family on Federal Hill, and work at Nicholson File.

All was not hardship and work on the Hill. Annual outings on Irish Day to Crescent Park and Oakland Beach were exciting events. And St. Patrick’s festivities were an especially great occasion in the community. I still remember Pat’s daughter, my great aunt, Kitty McKenna, telling me of the thrill of attending the St. Patrick’s Day parade on Broadway in the 1890’s. She wore a new dress, with a sash, made by her mother.

Her memory of such occasions was not complete bliss, however. She recalled how Yankees would wet down their stoops so that Irish kids had nowhere to sit to watch the parade.

Grocery stores and taverns became social centers of the community. John McKenna ran a grocery store a few doors down from St. John’s Church on Atwells Avenue. In addition to daily provisions, the store served as a place for friends to meet and talk – a nineteenth century Starbucks, but with a bit of cheer thrown in.

John P. Ryan was also a grocer, as well as an immigration agent who could assist in bringing relatives to America, and for those homesick for the “old sod,” a ticket home.

By the 1890’s, Immigrants from southern Italy had moved to the Hill. Unhappy with Irish priests, they were granted their own church, Holy Ghost, in 1899. Businesses that had been organized by and for the Irish gave way to those catering to the Italian community. As an example, Margaret Riley recently told me that her grandfather, Michael D. O’Connor, owned a grocery store and butcher shop near the corner of Atwell’s Avenue and what is now DePasquale Square. By 1900, an Italian market had moved next store, and pushcarts on the square were selling fish, fresh vegetables and live chickens. The family business relocated to the Armory district shortly thereafter.

Having the two groups living together was a formula for disaster. For example, on the evening of August 18, 1873, the collision of a horse and buggy and an express wagon, at the corner of Atwells Avenue and Acorn Street, led to a brawl between two Irishmen and two Italian men. Police broke up the fight, but the neighborhood was put on edge.

My own family bore the scars. In the early 1920’s, my Great-Aunt Agnes McKenna fell in love with a young Italian teenager named Frank. They were not allowed to marry. As a result, Agnes became a nun. Till the end of her life, she loved that man. It seems that that was the case for him, as well.

So what is left to remind us of the community? Irish-Federal-Hill is hard to find. Much of what was Federal Hill was sacrificed to the Route Six expansion in the fifties and sixties. Several major streets were erased, or truncated. For example, Tefft Street, where three generations of my family lived, is gone. Acorn Street, once a gateway from the Hill to the factories and bustling with family life, is now barely an alley on the Hill. The same is true with Trainor and McAvoy Streets. Named for Irish residents, they are a shadow of what they were. And Murphy Street, still listed on Google Maps, now exists as the parking lot for Walgreen’s Pharmacy.  Finally, their Irish church, St. John’s, built in 1870, exists only as some foundation stones and a small park on Atwells Avenue.

Still, I know, when I sit down to a plate of Penne ala Vodka on DePasquale Square, I’m seated just feet from where my McKenna/Duggan family called home. And I am reminded of a distant time when these Celtic folk struggled to make this city and country their home.

And I’m grateful for the delicious Italian legacy!

Sláinte for St. Patrick! And Salute to St. Joseph!

This entry was posted in On Line Articles. Bookmark the permalink.